In this territory of Hong Kong, that has now become a melting pot for the rapid expansion of Fitness and Yoga techniques for the majority of Asia, I have been incredibly fortunate to contribute to the growing genre known as Aerial Yoga.

As a Master Trainer in the field of this unique movement genre that has proven to be incredibly beneficial for health, confusion of what is what still remains.

Created first by Christopher Harrison, and distributed by his founding company known as AntiGravity® Fitness, the program has emerged full force across the globe.

Contrary to popular belief, the genre and program Aerial Yoga is merely ONE of the methodologies that we use the AntiGravity® Hammock for..! And, the widely used name of Aerial Yoga, that has become a staple program in leading Yoga and Fitness gyms around the globe, is still widely misunderstood in the market.

Imitation is the highest form of flattery. Different configurations of the Hammock, spin-off copy training systems, and in multiple countries where linguists challenges and awareness of the original is still yet to be fully understood, I want to share with you an interview I did with FLEX STUDIO HK in an attempt to bridge the gap.  AntiGravity® in comparison to Aerial/Fly/Hammock/Body/K/Bed Sheet Yoga Classes are Same Same just VERY VERY different. The main differences you ask? Originality, Authenticity, Safety, Quality.

Read more about why we only use the AntiGravity® Hammock for our Suspension Fitness, AIRbarre, Pilates, Restorative, PT and Aerial Yoga teacher training, workshops and classes at FLEX Studio HK.

Want to know what the experts know? Every month, our top trainers will advise on what helps them stay fit, healthy, strong and energetic and how they make the studio equipment work best for them.

Here, AntiGravity® Master Trainer Tamer Begum tells us why the unique Harrison Hammock is the only aerial tool he trusts and how it differs from other aerial apparatus.

Q: Why do your AntiGravity® classes use the blue Harrison Hammock and what’s it made of?

Q: Where did it originate?

A: First approved by Broadway to fly celebrities on stage, AntiGravity® has been a leading aerial performance company in the USA since 1999. The Harrison Hammock is rated to hold well over 2000KG of dynamic load. It’s made in the US and is the first Aerial Hammock used for performance and then yoga/fitness. In fact, the Harrison Hammock is the apparatus that started the aerial yoga genre.

Q: What hammock is not great for a first timer?

A: Many ‘aerial Yoga or fly yoga’ schools teach classes with a single overhead point hammock, which is much less safe and accessible. The single point hammock was first used for performance similar to Aerial Silks. Aerial Silks are simply two very long pieces of fabric attached to an overhead point. Primarily used for performance and made famous by circus artists, a single point hammock is more difficult to accommodate people who are new as the apparatus is less stable when in the air. 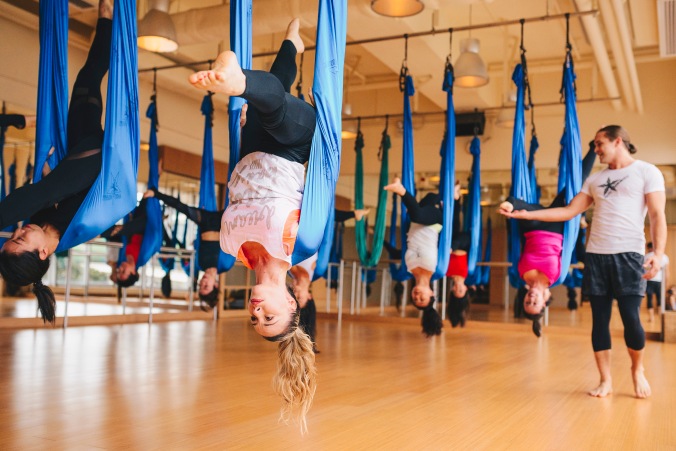